Go to the U of M home page

Advancing the health, well-being, and performance of horses 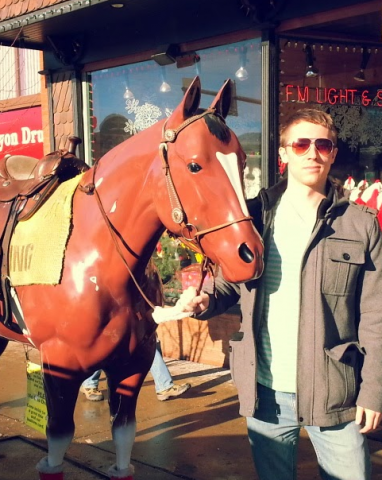 I am curious in examining the genetic basis for quantitative traits in complex organisms. I am interested in using bioinformatics techniques such as machine learning and statistical modeling in order to examine big data and extract meaningful insight to answer questions rooted in biology. I am also interested in populations genetics and evolution of populations of sequence.

I am also interested in approaching biological problems from a computational standpoint, especially those that require multiple types of data and are of a large scale. I currently am involved in projects that range from whole genome maize coexpression data to pathogen response in humans in mouse systems. I enjoy implementing and designing web architecture that responds to the needs of contemporary data sets and exploring web technologies and techniques.

Using high throughput ionomics systems to identify genetic factors which determine the maize grain ionome: Working with collaborators who have extracted quantitative measurements of important ion concentrations in a diverse mapping population, we are working to extract whole genome RNA-Seq transcriptome data from root tissue across the entire mapping population. We are developing integrative approaches which make use of co-expression, association mapping, and QTL data to identify causative genes which are responsible for ionomic traits.

Evidence for Positive Selection on the equine GYS1 gene: We examined haplotype frequencies in a 2Mb region surrounding the GYS1 locus in two prevalent breeds of domestic horse, the Quarter Horse and Belgians. Using the extensive pedigree information available for the domestic horse, we can examine models of sequence evolution under both neutral evolution and under known demographic models. We examined intensity of selection of both the ancestral GYS1 allele as well as the allele reported to be linked with equine metabolic syndrome and found evidence that there is an extended haplotype surrounding the mutated allele. I helped develop models for neutral evolution under various selection parameters and established a null distribution in order to establish an empirical p-value for selection pressure.

COB: The Co-Expression Browser -- a web application for browsing genome scale transcriptome data in maize: We built a suite of tools developed specifically for the web from the ground up using contemporary web programming techniques such as AJAX in order to present genome scale gene expression data through the web in a browsable format. We used the cytoscape web library to show co-expression networks and integrated basic data mining tools to examine functional enrichment of sub-networks. In addition to providing access to two large maize transcriptome data sets (the developmental atlas and a diverse set of zea accessions) we examined functional differences between the two networks by integrating various ontology and metabolic networks. A COB prototype is currently available via the web at csbio.cs.umn.edu/cob